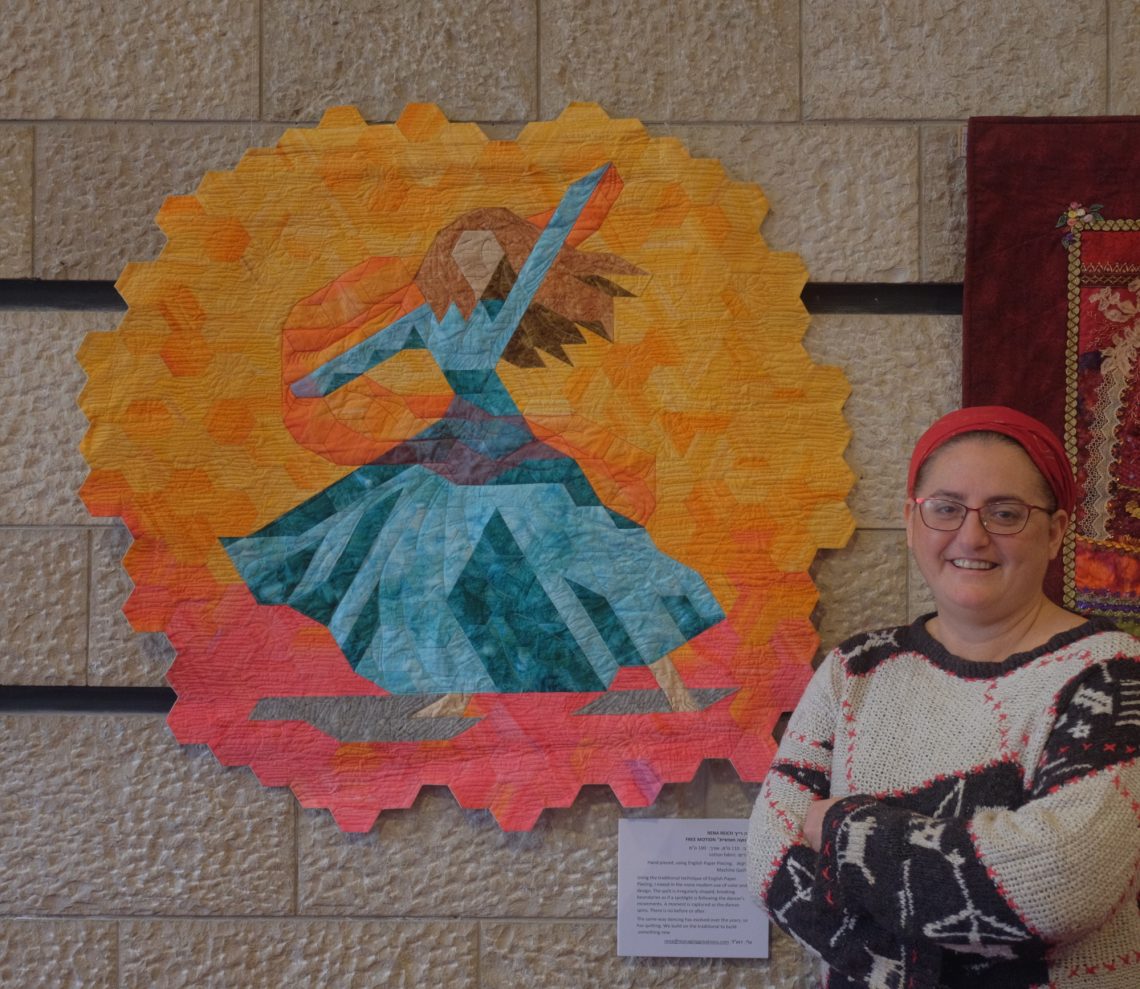 Once a year the Israel Quilt Association has an exhibition. This year the theme was “Celebrating the Traditional Quilt.” The idea was to incorporate old fashion methods and to come up with something new.

I thought about what I wanted to do for the show, and I thought what is more traditional than hand piecing? My great Aunt Marion hand pieced all her quilts. She was pretty hardcore.

I needed something a bit different. Hand piecing was a good start, but I wanted a more modern interpretation. I came up with an English Paper Pieced (EPP) project that is not your great aunt’s EPP quilt. I recruited my daughter Shira to help me with a design. The only limitation that we had was that we needed to use a hexagonal grid. That’s when The Dancer was born.

The quilt is made of 3-inch hexagons. Some of them have been subdivided, but each overall block is a hexagon.

I don’t do EPP the way that most people do. Most people use cardboard shapes and baste the fabric, either using glue or stitches, onto the cards and then stitch each of the hexagons together. I cheat. I use wash away applique sheets and I print out the hexagons on the sheets. I then cut them out and iron them on to the fabric. I use a fabric glue stick to tack down the edges.

You may think that there is not much of a difference between what I do and what others do, but with the more traditional method, you need to remove the paper hexagons after the pieces are sewn together. With my method, I don’t need to remove anything. If this were a bed quilt, the first time that it was washed, the applique paper would just melt away. Since it’s a wall hanging and will probably never be washed, it adds a bit of stability to the quilt. Which is important, because it has irregular edges.

I added tulle over the hexagons to create a layered effect for the scarf that the dancer is dancing with. It seemed like a good idea at the time. I had to pin the tulle in place while I was sewing it and it was just a big pain to work with. I’m happy with the end product, but I don’t know if it was worth sticking myself with pins all the time.

I have no idea how long the actual quilt took to make. I worked on it for literally months. I started right after the show was announced and I finished it only days before it had to be turned in.

When it came to quilting the quilt, I wanted to soften the hard corners of the hexagons. I quilted the features of the face and the body into the quilt. It completely changed the look of it. David Walz, my future son-in-law, is an artist. He helped me map out the features of the quilt, like the face, feet, and folds of the dress.

To make the dancer stand out more, I quilted the background very densely. I was going for a blurred background with a lot of movement, and I think that it works. I was careful to leave about 1/4 inch around the edge in order to finish it the way that I wanted.

The name “Free Motion” is a play on words. The dancer is spinning freely in space and the quilting is also free motion. My daughter came up with the name. Once she said it, I had to use it. It was just perfect.

I hope to write another post about the whole show. This is just my little contribution. If you are in Jerusalem, I suggest visiting the Jerusalem Theatre. The show will be up until the 21 of January. If you are able to make it there, say hi to my dancer.

This is so exciting! I finally got my first YouTube video out. It’s the first video, so please be kind. I am so pleased with

We’re back! What an amazing trip!

So much information! I need to write it all down! These last three weeks have been so incredible and insane. I can’t believe that we

Quilt Israel is Going on Vacation

Hello, my friends! I have some good news and some bad news. The good news is that there is relative quiet in Israel and Covid

© 2021 All Rights Reserved to Quilt Israel